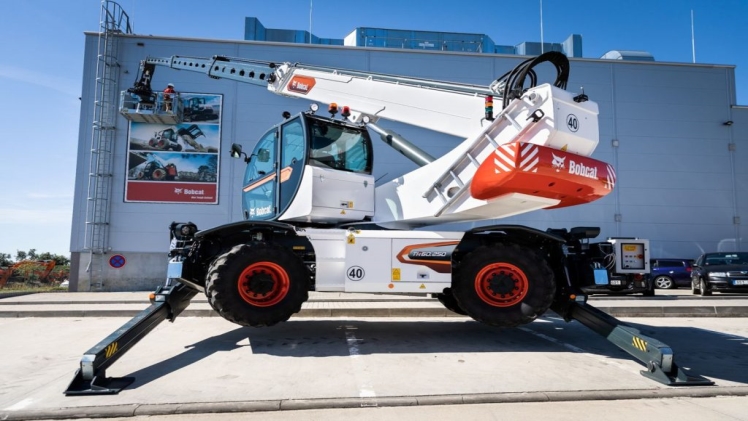 Bobcat unveils 12 models different Stage V engines to cope with competitive forces with their ‘Next is Now’ effort which combines innovative product development and diversification elements being merged with technologies that are intelligent, user-friendly and safe.

As stated by Gustavo Otero who is currently the president for Doosan Bobcat EMEA “Telehandlers have become a fundamental asset to Bobcat’s business strategy,” as their ground-breaking R-Series offers more than just high performance as they are also noted for their robustness, accurate controls and intuitive operation capabilities. The R-series according to another Bobcat spokesperson is capable of tackling just any type of task at any given construction site. Despite the economic downturn in most parts of the world due to the Novel Corona Virus that has become a worldwide plague so to speak, Bobcat is planning to double the production their R-series Bobcat telehandlers by 2025.

The latest R-Series range of telehandlers from Bobcat that are often seen as substitutes for standard excavators comprises of three distinct categories starting with the Compact telescopic loaders (mini excavator) with 3 models within its category (TL26.60, TL30.60 and TL30.70), the Middle range telehandlers (standard excavators) with 4 models within this series (TL35.70, T35.105, T35.105L and T36.120SL) and the big boys range the High lift telehandlers that is offered under 5 different models T35.130S, T35.130SLP, T35.140S, T41.140SLP and T40.180SLP. As a substitute for excavators “Our telehandlers are the most popular substitutes the world over” Gustavo added.

Bobcat has rolled out a business objective that will further improve their presence especially in the Middle East which would potentially accelerate the growth of their business within the construction spectrum with this new generation of excavator evolution that is robust, safe and extremely reliable. This reliability is a driving factor in the popularity of the model in the excavator hire industry along with large construction firms seeking to minimise long term ownership costs. It is the intention of Bobcat to support construction factions with these machines as the new R-Series telehandlers do not just offer agility on demand, but also offers enhanced smoothness due to the newly configured transmission system that allows operators to pull off the trickiest jobs with almost surgical precision.

The precision of these machines is also attributed to the combo of the Boom Positioning System and the ultra-accurate joystick that comes with an “inching function” which complements the improved visibility afforded to the operators from inside the cab.

The improved inching pedal design enhances the ease of use for the operator which is critical to the reduction of fatigue and apart from that, Gustavo adds that the engine brake is higher and this facilitates a shorter stop distance which enhances safety within construction sites.

As for the turtle/rabbit speed system, it has become standard on all models and is controllable with the joystick.

There is also a new addition referred to as DYNAMIC mode which could be used when the machine needs to perform with rapid transmission which could also be achieved via the optional hand throttle that features the FLEX DRIVE function which renders travel speed independent from the rpm of the engine.