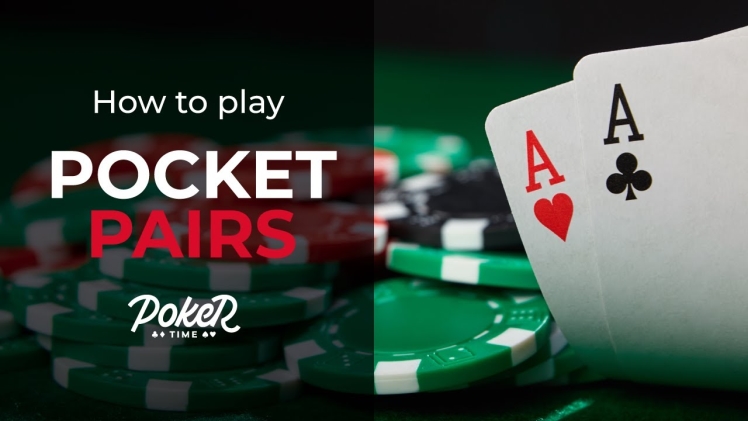 Pairs always look great in poker games, but often in one-on-ones you may be no more than a 50-50 shot to win the hand. Premium pairs (a pair of the same value hole cards with a value Jack or higher. The possible pair is A – A) should always be raised pre-flop, but ‘set mining’ with smaller pairs in Early Position (EP) can be good if the pots are small.

The following article, we explain about pair cards in poker games that you need to understand further and how to play it in a poker game table or online in Idn poker.

When facing limpers in middle position, late position, or the blinds on the table gamer, you are usually going to want to over-limp, rather than raise. This is because one raise will usually not fold everyone out of the pot, and it’s difficult to flop any kind of hand with a small pocket pair if you don’t flop a set. Small pairs also usually tend to be second, third, or even fourth pair on the flop, so they will be in bad shape against most hands that have connected with the flop.

When there is already a single raise, small pocket pairs will usually be good hands to fold against good players. Again, they just don’t hit the flop often enough to play very well. Hitting the flop isn’t everything in poker, but good poker hands are ones that connect with a lot of flops, or make up for not connecting by already being strong on their own. Small pocket pairs do neither.

However, if there is a single raise and a couple callers, you can often call with these hands, hoping to flop a set and win a big pot. With more players in you have better pot odds, and a better chance that someone will flop something they will put money in with against your set. But if you’re ever facing a 3-bet with a small pocket pair, you’re usually going to be better off just folding.

Pocket pair like: 5-5, 6-6 can be played in middle or late position

When To Call: Early Position to Late Position

When To Fold: To re-raise/4-bet

You should follow a lot of the same guidelines with mid pairs as you do with small pairs. The goal a lot of the time will be to hit a set, and you usually won’t be able to play a big pot post flop if you don’t hit one, but mid pairs have a lot more flexibility.

Mid pairs inherently have a lot more strength than small pocket pairs, because they effectively gain another way that they win the pot at showdown: unimproved. This alone means you can play mid pocket pairs from any position, and you’ll want to be coming in for a raise with them if you’re opening the pot.

When To Raise: Middle Position to Late Position (unraised pot)

When To Call: Early Position

When To Fold: To re-raise/4-bet

Premium pairs get dealt rarely, but they should be used to raise unraised pots, or re-raise pre-flop (3-bet/4-bet etc) wherever you are at the table.

In most cases these hands will play themselves before the flop. In most games you’ll want to raise with these hands regardless of what the poker rankings are pre-flop, and be willing to put your stack all in before the flop if you’re able to (assuming 100 big blind or smaller effective stacks).

There are tighter games, and especially online you won’t always want to get all in with QQ pre-flop, and in many live games, people won’t be 3betting very wide, so you won’t necessarily want to keep re-raising it. But most of the time, 4betting or 5betting all of these hands will be the best play. You can sometimes trap with AA pre-flop, by not 4betting when normally you would, but it’s usually better not to do that with KK or worse. This is because AA is much less vulnerable after the flop as compared to KK or QQ.

Pocket pair like: Q-Q, K-K, A-A can be played any position

When To Raise: Early Position to Late Position

When To Call: N/A

When To Fold: N/A

In poker games, if your pocket cards pair, you get the chance to win the game. The following is starting pair hands win percentage in poker games:

Having read this article, you can visit Idn poker terbaik  to play it online from every location you residing.